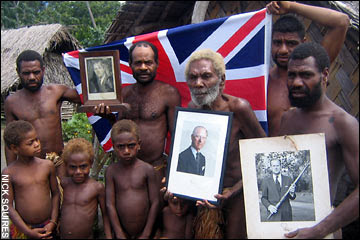 Is Prince Philip an island god?
By Nick Squires
BBC News, Vanuatu
Britain's Duke of Edinburgh may be planning a quiet birthday celebration at home this weekend, but there will be feasting and flag-waving in an isolated jungle village in the South Pacific nation of Vanuatu, where he is worshipped as a god.
The Land Cruiser ground up the rough dirt track, pitching and rolling like a boat. The trail was so severely eroded that it was more like a river bed, with miniature canyons gouged out by the monsoon rains.
I had been drawn to this poor excuse for a road by a story so unlikely that it sounded barely credible.
It was one I had wanted to investigate for years.
Legend had it that there was a clutch of villages on the island of Tanna in Vanuatu which - as bizarre as it may seem - worshipped Prince Philip as a god.
How and why they had chosen the Duke of Edinburgh, I had no idea. I fully expected the story to be either false, or wildly exaggerated.
.
.
.


Distant adoration
After an hour's drive we pulled into a jungle clearing shaded by giant banyan trees.
A short walk led to the village of Yaohnanen, a collection of sagging thatched huts, banana trees and snotty-nosed little kids.
With the help of my driver-cum-interpreter, Lui, I was introduced to the chief of the village. Jack Naiva was a bright-eyed old man of about 80, with grey hair and a faded sarong wrapped around his wiry body.
I felt deeply foolish telling him I had come to his village to ask if he worshipped the Queen's husband.
I wondered if it was all some sort of elaborate joke.
But the look on Chief Jack's face told me it was not. He dispatched one of the villagers and a few minutes later the man returned from a hut with three framed pictures.
They were all official portraits of the Prince.
The first, in black and white, looked like it was taken in the early 1960s.
The second was dated 1980 and showed the Prince holding a traditional pig-killing club - a present from the islanders.
The most recent was from seven years ago.
They had all been sent from London with the discreet permission of Prince Philip, who is apparently well aware that he is the subject of such distant adoration.
Ancient legend
Chief Jack squatted on the ground as he told me how the Prince Philip cult had come about.
It seems that it emerged some time in the 1960s, when Vanuatu was an Anglo-French colony known as the New Hebrides.
For centuries, perhaps millennia, villagers had believed in an ancient story about the son of a mountain spirit venturing across the seas to look for a powerful woman to marry.
They believed that unlike them, this spirit had pale skin.
Somehow the legend gradually became associated with Prince Philip, who had indeed married a rich and powerful lady.
Villagers would have seen his portrait - and that of the Queen - in government outposts and police stations run by British colonial officials.
Their beliefs were bolstered in 1974, when the Queen and Prince Philip made an official visit to the New Hebrides. Here was their ancestral spirit, resplendent in a white naval officer's uniform, come back to show off his bride.
"He's a god, not a man," the chief told me emphatically, pointing at the portraits.
Response to colonialism
None of the cult followers can read or write.
They told me - somewhat amazingly - that it was only this year that they learnt the date of the Prince's birthday - 10 June.
As Philip turns 86 and they are planning to mark the occasion with a feast and ceremonial drinking of kava, an intoxicating brew made from the roots of a pepper tree which makes your mouth go numb.
They have even acquired a large Union flag which they are going to run up a bamboo flag pole.
It is easy to see all this as so much South Seas mumbo jumbo.
But that would be a grave mistake, anthropologists told me.
Millennial movements like this were a highly sophisticated response by islanders in the South Pacific to the arrival of colonialism and Christianity.
By combining the fundamentals of their ancient beliefs with new elements gleaned from their contact with the West, they were able to preserve their culture.
There is, of course, a delicious irony in all this.
Prince Philip, after all, is a man who has a reputation for making politically incorrect gaffes, often about foreigners.
He once advised British students not to stay too long in China for fear of becoming "slitty-eyed".
And he asked a group of stunned aborigines if they still threw spears at each other.
The villagers of Tanna may live a life far removed from the splendour of Buckingham Palace and Balmoral in far away Britain. But they are as firm in their beliefs as Prince Philip is in his.
I suspect that if they were ever to meet, they would get along rather well. 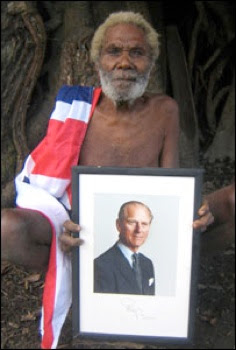 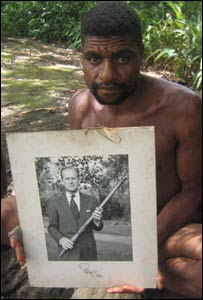